To share your memory on the wall of Stephen Smith, sign in using one of the following options:

Throughout his working life, Steve held a variety of jobs. In his young days, he worked with a local paving company, and also as a long-haul truck driver. In later years, Steve worked in the fishing industry, as an employee at a local fish plant, and as a lobster fisherman. In his spare time he enjoyed hunting, fishing, camping, and driving his motorcycle.

Cremation has taken place under the direction of Sweeny's Funeral Home. A memorial service will take place at a later date. Steve will be laid to rest, near his parents, in the Port Maitland Beaver River Cemetery. Donations in Steve's memory may be made to The Heart and Stroke Foundation or charity of your choice.

The family of the late Stephen "Steve" Smith would like to offer a special word of thanks to Jordan Langille, Wayne Newell, Dave Sweeney, Gary Upton and Kevin Whitehouse. Their help following Steve's sudden passing is very much appreciated. Online condolences may be sent to sweenys@sweenysfuneralhome.net, or you may sign the guestbook online at www.sweenysfuneralhome.net
Read Less

To send flowers to the family or plant a tree in memory of Stephen Leroy Smith, please visit our Heartfelt Sympathies Store.

Receive notifications about information and event scheduling for Stephen

There are no events scheduled. You can still show your support by sending flowers directly to the family, or planting a memorial tree in memory of Stephen Leroy Smith.
Visit the Heartfelt Sympathies Store

We encourage you to share your most beloved memories of Stephen here, so that the family and other loved ones can always see it. You can upload cherished photographs, or share your favorite stories, and can even comment on those shared by others.

Posted Apr 21, 2021 at 06:22pm
Bruce and Gail Smith
Our deepest sympathy to you and your family. Bruce will always remember the good times at the hunting camp.
His big smile and easygoing personality will always be remembered by us. Rest In Peace Steve.😥
Comment Share
Share via:
HG

Posted Apr 20, 2021 at 09:48am
So sorry to hear that Steve passed away. My sincere condolences to Gary and family. God bless 💕
Comment Share
Share via:
DN 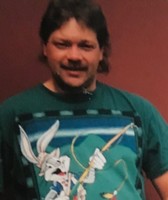