To share your memory on the wall of Burns Thompson, sign in using one of the following options:

Print
Video link can be found under photos and videos or by cutting and pasting this link intro your browser. The service video is also available via Facebook

A life well lived; a life wel... Read More
Video link can be found under photos and videos or by cutting and pasting this link intro your browser. The service video is also available via Facebook

Burns Thompson left an impression everywhere he went and within his 69 years here on earth, he went a lot of places. From his signature round glasses, impeccable sense of style, robust moustache, various and often amusing hair styles (including a lengthy mullet), you might say he stood out. But what really set him apart from the crowd was his ability to bring people together. He was someone that everyone wanted to be around - the life of the party. He was known and loved by many in the small town of Yarmouth, Nova Scotia, where he spent the majority of his life. Many knew Burns as a spirted and innovative educator. Although he taught in various schools throughout Yarmouth county, he is perhaps best remembered for his tenure at Yarmouth Junior High School where he spent more than a decade of his career as an esteemed science teacher. His epic tangents, wild science experiments and copious board note sessions were indicative of his passion as a teacher. As he finished out his career as an impactful and respected administrator at Acadia School, he was known for his fair, yet gently masterful, leadership style.

A soft-spoken man with a commanding presence, he was quick to laugh and possessed a biting humor. He was often the one supplying the laughs amongst those he spent time with. His passion for music and the songs he came of age listening to bloomed in his later life with much time spent with his impressive guitar collection, playing and singing alone or with groups. Even while hospitalized during chemo treatments he brought a levity only he could have with trivia clues (and prizes) for the doctors and nurses to participate in daily, and music he played to pass the time during those long stays.

His love for family was fierce and unrelenting. As a parent, he was fair, introspective and stern. It was important to him that his children and students understood that their actions mattered, and it wasn’t uncommon to hear the phrase, ‘you don’t live in a vacuum’ thrown around when those merits were in question. As a husband, he found his perfect match and love of his life with Raquel, a true pairing of the minds.

Retirement also suited Burns, although he was really never that far from the classroom, teaching others what it meant to live life to the fullest wherever he went. As a knowledge lover, he was well known in the Yarmouth trivia circuit as a force to be reckoned with. A voracious traveller, he and Raquel traveled to well over 30 countries in their time together, often bringing back treasures and collectables from all over the world. His culinary prowess often reflected his worldly journeys, and he was well known for his accomplishments in the kitchen.

The grace with which he handled his disease and each attendant loss it imposed might be the best testament to the man he was, never dwelling on the freedoms it claimed and doing his best to live in the moments he had left, and often brightening the days of those involved in his treatment.

Loved by so very many, Burns is survived by his wife, Raquel, three children, Alix Robinson (Matt), Joel Thompson & Erica Thompson (Dwayne Noseworthy), grandson, Cary Robinson, sisters Wendy Keen (Mike) and Gail Murphy (Gerry), Stepmother, Daisy Thompson, nieces, nephews, and many, many other family and friends in Yarmouth, and around the world. He was predeceased by his parents, Burns (Senior) Thompson and Gwendolyn Thompson.

A special thank you to Dr. Shannon Murphy and the nurses and staff on the 8th floor of the VG, everyone who lent their space, their time and well wishes throughout this journey.

Donations can be made to Gilles Boudreau and Friends Cancer Help Fund or Tri-county VON. Online condolences may be sent to sweenysfh@eastlink.ca, or you may sign the guestbook online at www.sweenysfuneralhome.net
Read Less

To send flowers to the family or plant a tree in memory of Burns Earl Thompson, please visit our Heartfelt Sympathies Store.

Receive notifications about information and event scheduling for Burns

We encourage you to share your most beloved memories of Burns here, so that the family and other loved ones can always see it. You can upload cherished photographs, or share your favorite stories, and can even comment on those shared by others.

Posted Jan 09, 2021 at 01:46pm
Our deepest sympathy to the family...I got to know Burns a little better when he visited his Father my Uncle in the past few years before his passing. His wit and stories were full of life and adventure. I enjoyed his playing and singing and shared a drink or two as well and I too collect coasters lol....maybe it is a family thing....Rest Easy Burns..xx

Posted Jan 08, 2021 at 02:35pm
So sorry for your loss . Burns was one of the most dedicated teachers I have known. I shall always remember him for his great sense of humour and his witty sayings.
Ralph Thibeau

Posted Jan 08, 2021 at 10:11am
All of our memories of Burns are full of fun and laughter. We cherish our friendship with Burns and Raquel. Sending you so much love Raquel, and to all his family. He will be so deeply missed.
Comment Share
Share via:
DB

Posted Jan 06, 2021 at 02:30pm
Erica and Dwayne, We are so sorry to hear about your Dad. Our thoughts and prayers are with you and your family. Andy, Dawn, Taylor and Daphne

Posted Jan 06, 2021 at 12:15pm
Dear Raquel, Alix, Joel, Erica and Cary
Condolences to all of you. Burns was such a presence wherever he went. His intellect, style, sense of humor and thoughtfulness was always on full display. His students and colleagues benefited from his ability to listen attentively and offer guidance in decision making. Burns was one of the first people I met when I began teaching in Yarmouth. He was welcoming and friendly which was so appreciated. I was fortunate to work with Burns as a colleague and then again when he was principal at Arcadia School. His love of teaching and being a positive influence on students and staff was always evident.
There are no words to ease your pain but please know that all of you are in my thoughts. 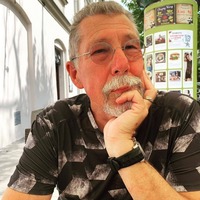