To share your memory on the wall of Antoine Jacquard, sign in using one of the following options:

To send flowers to the family or plant a tree in memory of Antoine Gerald Jacquard, please visit our Heartfelt Sympathies Store.

Receive notifications about information and event scheduling for Antoine

There are no events scheduled. You can still show your support by sending flowers directly to the family, or planting a memorial tree in memory of Antoine Gerald Jacquard.
Visit the Heartfelt Sympathies Store

We encourage you to share your most beloved memories of Antoine here, so that the family and other loved ones can always see it. You can upload cherished photographs, or share your favorite stories, and can even comment on those shared by others.

Posted Mar 04, 2020 at 04:11pm
Gerald was a wonderful man with such a beautiful heart. -Always a gracious host,along with Carol, and so much fun with that bright alive “love of life “look in his eyes. Tusket Falls will not be the same without him.

Posted Feb 09, 2020 at 02:17pm
Carol and family. I had no idea that Gerald was ill. Please accept my deepest sympathy for your loss and take comfort in the knowledge that many are thinking of you in your time of sorrow. Lorraine
Comment Share
Share via:
M

Posted Feb 07, 2020 at 07:18pm
Dear Carol and family.....I just heard of Gerald passing. It was always a pleasure to have a great chat when we would meet. A wonderful guy with a great smile and terrific hugs. Knowing we were cousins was a plus. My thoughts and prayers are with you all....RIP Cousin
Comment Share
Share via:
KL

Posted Feb 06, 2020 at 02:14pm
Such a caring and loving husband, dad and grandad. It was my honor to call Gerald cousin. Always a good laugh and good heart. RIP my sweet cousin. With much love Donna Lee Moody (Ken Leyendecker) Mary Esther, FL.
Comment Share
Share via:
GM

My condolences to you . My thoughts and prayers are with you at this time . May you find comfort in the memories you shared . 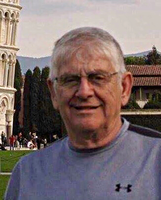