To share your memory on the wall of William \"Willy\" Jack, sign in using one of the following options:

To send flowers to the family or plant a tree in memory of William "Willy" Gordon Jack, please visit our Heartfelt Sympathies Store.

Receive notifications about information and event scheduling for William "Willy"

There are no events scheduled. You can still show your support by sending flowers directly to the family, or planting a memorial tree in memory of William "Willy" Gordon Jack.
Visit the Heartfelt Sympathies Store

We encourage you to share your most beloved memories of William "Willy" here, so that the family and other loved ones can always see it. You can upload cherished photographs, or share your favorite stories, and can even comment on those shared by others.

Posted Jan 01, 2021 at 09:18pm
Willy will be deeply missed as a father ,grandfather husband and father in-law always in our thoughts and never forgotten . Will always remember his funny personality and lots of fishing and hunting stories . Love always Jeannie
Comment Share
Share via:
RD

Posted Dec 24, 2020 at 07:13pm
Willy and I spent many a day hunting and fishing the Fraser River together. We were next door neighbours for a couple or three years. When duck hunting with him he always shot them all - at least according to him. LOL. Many fond memories.
Comment Share
Share via:
CA

Posted Dec 23, 2020 at 07:41am
The Canadian Military Engineers extend to you and your family our deepest sympathies in your time of sorrow.

Posted Dec 22, 2020 at 05:09pm
my heart and thoughts and prayers is downhome with my family .I met Willy when i was a teenager and have memories of him .so rest in peace Uncle.
Comment Share
Share via:
W

Posted Dec 22, 2020 at 04:31pm
Love and condolences to all who knew and loved him ,he will be missed ,Uncle Willie was larger than life ,He was there if you ever needed anything ,and he was skilled in so many things,he loved life ,and hunting and fishing were a passion of his .Willie could accomplish any thing he set his mind to ,if he wanted to build something he studied it and then did it himself like wanting to make canoes,so he made canoes ,wood working if he wanted it , he built it . he always seem to master anything he put his hands too . Rest in peace Willy it was a good fight xoxo and a life well lived .
Comment Share
Share via: 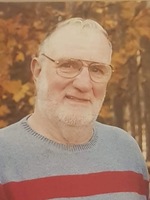