To share your memory on the wall of Sushil Roy, sign in using one of the following options:

To send flowers to the family or plant a tree in memory of Sushil Mohan Roy, please visit our Heartfelt Sympathies Store.

Receive notifications about information and event scheduling for Sushil

We encourage you to share your most beloved memories of Sushil here, so that the family and other loved ones can always see it. You can upload cherished photographs, or share your favorite stories, and can even comment on those shared by others.

Posted Sep 04, 2020 at 06:29pm
So sorry to hear about Sushil's passing. It was always a pleasure to talk to both of you at Jo-Anne's. Always uplifting conversations. Take care Ray. Bill & Joanne
Comment Share
Share via:
LG

Posted Sep 03, 2020 at 04:59pm
Uncle Ray I'm so sorry to hear of Uncle Sushils passing he will be missed I so enjoyed his company and shared stories at family gatherings! So many Wonderful memories of him throughout the years. Our heartfelt Sympathy Love your Niece Lisa & Daughter Gracie Gatt & family ( Ontario) xoxoxo much Love
Comment Share
Share via:
RM

Posted Sep 03, 2020 at 04:18pm
Sorry to hear this news, please accept our sympathies & condolences to Ray Comeau and your family & loved ones. Our best wishes as you grieve the loss of a loved one.
Elizabeth & Robert McCarty & family.
Comment Share
Share via:
DW

Posted Sep 03, 2020 at 12:04pm
Uncle Ray. I am so sorry for your loss. Sushil sounds like an amazing man and I am glad you made so memories that will help you through all the tough days ahead. heartfelt sympathies to you ♥. Donna Wenners,
Comment Share
Share via: 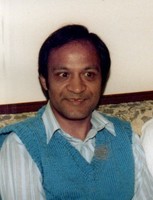