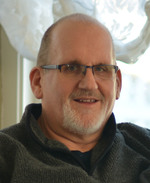 Scott Donald MacDonald passed away at the Yarmouth Regional Hospital on Sunday, April 17, 2022, after a long battle with liver disease. He was 58 years old.

Scott was born on March 6, 1964, in Zweibrucken, Germany, while his father was assigned with the Military in Europe. He attended Atlantic Baptist College and Acadia Divinity College. He held a Master of Divinity degree and embraced his call to pastoral ministry. He especially had a passion for rural ministry and served pastorates in Port Lorne (NS), Belmont (PEI), Pugwash (NS) and Port Maitland (NS). He finished his formal ministry in Sandford, NS in 2016 following cancer surgery which exasperated his liver disease. His health no longer allowed him to do what his heart yearned to continue.

His love for people and community always lead him to be involved with various outreaches, whether it was on the SAC in his children’s schools, as a Board member or Spiritual Life leader of Camp Peniel, or as a member of the Spiritual Care committee at the Yarmouth Regional Hospital. One of the highlights for Scott was chaplain of the local Legion in Port Maitland, and organizing and participating in the annual Remembrance Day service held in the Port Maitland Elementary School. It was painful for him when his health forced him to have to give up this last community involvement.

Despite Scott needing to retire from full-time ministry, he kept true to his pastoral calling and character by continuing ministry in his own way. Even in his sickness he struck up friendships and connections with those around him. Scott strived to look beyond the surface and to see someone for who they are. This led to him delaying sharing his profession so that people could be their authentic selves without judgement of his title.

To us, Scott was larger than life, but not in his own eyes. He disliked the title of Reverend, but if one was necessary, preferred that of Pastor Scott (or PScott as he was affectionately known by the youth group!) He was a gentle giant with a great capacity for love and compassion. He will be remembered for his infectious and hearty laugh, and his ability to anticipate a good joke. He was gifted in his ministry to care for people, especially with illness, dying, and death. He had a way of calming the room with just his presence. He touched many lives by offering great help, care, and love in their toughest times. His compassion for those hurting in sickness and grief shone in the many hours he spent with families in hospital and the funeral home.

But Scott’s greatest joy and pride was in his family. He loved his children fiercely and was so proud of their accomplishments. He beamed through their weddings, and popped buttons at every graduation! The spirit being willing, Scott was looking forward to attending his son’s graduation with a Master’s degree from Acadia University in three weeks. Unfortunately, the body was too weak, but there is no question as to the desire of his heart. Scott loved all things Maple Leafs and was touched when Braedon arranged a trip to Toronto to watch their team play! He also shared a love for the New England Patriots with his kids, and family dinners rarely went by without a sports narrative taking place at some point! Scott was proud of his daughter’s career as a pharmacist. One of his simplest pleasures over the years was to bring her and her co-workers a coffee at work, just to check to see how her day was going. He was so proud to tell his liver transplant team that his daughter was looking after him!

And just as he was entering the gruelling process of liver transplant assessment, and the twelve-year struggle was intensifying, the Lord gave him the gift of a grandson. Luke’s smile and love lifted his spirits on the most difficult of days and gave him the courage to keep fighting. In his heart, his greatest role on this earth had become Grampie… or “Bimpy” as Luke had taken to calling him.

Visitation is planned for Friday, April 22, 2022, from 6-8 pm at Sweeny's Funeral Home on 567 Main St. Yarmouth, Nova Scotia. The funeral will take place on Saturday, April 23, 2022, at 2 pm, from Sweeny's Funeral Home, with Pastor Bill Parks officiating (The service will be live-streamed on Sweeny's Funeral Home website). Burial to be in Darlings Lake Cemetery. All are welcome to attend but we would request masks be worn. Family flowers only, but donations in Scott’s memory can be made to Sandford United Baptist Church, Camp Peniel, Red Cross, or a charity of your choice. Online condolences may be sent to: sweenys@sweenysfuneralhome.net, or you may sign the guestbook online at: www.sweenysfuneralhome.net. The family wishes to acknowledge Scott's amazing medical team; including the liver transplant team in Halifax, the staff of the ER and 4-East at Yarmouth Regional Hospital, our continuing care team, and especially our family Physician, Dr. Joe Gillis, for his exceptional care for Scott.

“For I know the plans I have for you,” declares the LORD, “plans to prosper you and not to harm you, plans to give you hope and a future.” Jeremiah 29:11.