To share your memory on the wall of Rev. Peter Turpin, sign in using one of the following options:

Provide comfort for the family by sending flowers or planting a tree in memory of Rev. Peter Turpin

Provide comfort for the family by sending flowers or planting a tree in memory of Rev. Peter Turpin

Public visitation will be held on Monday, November 23rd from 6-8 pm at Sweeny’s Funeral Home, Yarmouth. The funeral service will be held Tuesday November 24th at 2 pm with a maximum of 100 attendees. For those who are unable to attend , the service will be live-streamed on Sweeny’s website. In accordance with Covid regulations, face masks are required and there will be no reception at this time. A private family interment will be held in Cheggogin following the service. Donations in Peter’s memory can be made to Faith Memorial Baptist Church, Overton. Family flowers only.

The family wishes to thank Dr. MacDonald, Dr. Gillis, Robyn Surette, the Palliative care team, the VON and Home Care for their thoughtfulness and care during the past year.On-line condolences may be sent to: sweenysfh@eastlink.ca or you may sign the guestbook on-line at: www.sweenysfuneralhome.net
Read Less

To send flowers to the family or plant a tree in memory of Rev. Peter John William Turpin, please visit our Heartfelt Sympathies Store.

Receive notifications about information and event scheduling for Rev. Peter

We encourage you to share your most beloved memories of Rev. Peter here, so that the family and other loved ones can always see it. You can upload cherished photographs, or share your favorite stories, and can even comment on those shared by others.

Posted Dec 02, 2020 at 03:31pm
We were very sorry to learn of Mr. Turpin's passing. We will always remember him as a true Christian gentleman and scholar.
Sincerely,
Gary and Elena Arnett and Family
Comment Share
Share via:
AT

Posted Dec 01, 2020 at 09:13am
I had a wonderful visit with Peter when I preached in the Overton Church on June 12, 1989 when Peter was pastor of the church. In the morning I spoke on a subject dear to Peter's heart-"The Lordship of Christ," preaching on Colossians l:15-20. In the evening I spoke at the 20th anniversary of the church on "The Highway of Hope," taking my text from 1 Peter l:3-9. I thank God for Peter's influence as a man of God, who was such a blessing to his family and his flock. He is now "at home" with the Lord.
Rev. Allison Trites, Wolfville
Comment Share
Share via:
DN

Posted Nov 24, 2020 at 10:49am
My mother used to teach me that no man was indispensable, but there are some who are irreplaceable and Peter was one of those. Other preachers of his generation had greater reputations but few were actually greater preachers. That he was not better known was due entirely to his genuine modesty and humility, one of Christ's characteristics he always sought to model. He conducted the marriage service for myself and my late first wife Joy in 1972 and we remained firm friends despite the distance between us after he accepted the call to Overton. He had many qualities - far too many to list - but I shall always be grateful for his encouragement of my own preaching ministry when he was our pastor in Stapleford and the wisdom of his personal counsel whenever it was needed. It was an enormous privilege to preach for him in Overton on the two occasions we were able to visit after his move. Only eternity will fully reveal the effect his ministry had on so many lives on both sides of the Atlantic.
Comment Share
Share via:
MD

Posted Nov 23, 2020 at 01:17pm
We were happy to be neighbours of Reverend and Mrs. Turpin on Chebogue Point for a number of years and wish to express our sincere condolences to all the Turpin family. May you all be comforted at this time by memories of happy times and support of family and friends.
Comment Share
Share via:
BC 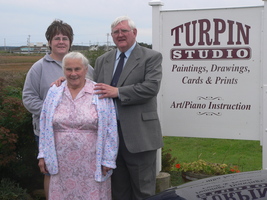 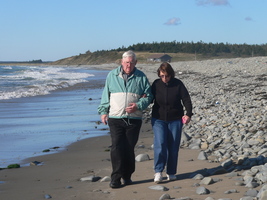