To share your memory on the wall of Pauline Marling, sign in using one of the following options:

Print
Pauline Eleanor Marling (Crowell), 100, wife, stepmother, grandmother, and friend in her community, died peacefully on March 2, 2021. She is predeceased by her first husband, Harold Chipman; by her second husband, Wiliam Oxner; and by her third husba... Read More
Pauline Eleanor Marling (Crowell), 100, wife, stepmother, grandmother, and friend in her community, died peacefully on March 2, 2021. She is predeceased by her first husband, Harold Chipman; by her second husband, Wiliam Oxner; and by her third husband, Bruce Marling. She is also predeceased by her four brothers, Albert, Henry, Douglas and Donald, in infancy, and her sister Irene, Mrs. Victor Smith. She is survived by her stepson David Marling [Angela], grandchildren Jonathan, Jennifer [Lawrence], Julianne [Cameron], and Jessica [Shane], as well as 10 great-grandchildren, and many nieces and nephews.
Born October 22, 1920 in Shag Harbour, NS, to the late Everett and Addie Crowell, she had happy memories of her childhood and family. She was the third of six children. When she was 16, her father built a cedar hope chest for her as a Christmas gift, which she treasured for decades after. She graduated from the Maritime Business College in Halifax, NS in 1947, and quickly found employment with Metropolitan Life in Dartmouth, NS, and then transferred to the Yarmouth NS office, where she retired in 1985.
Pauline was a member of the Women’s Institute in Yarmouth for several years, where she met and maintained several lifelong friends. It was two of these friends that matched her up with her third husband, Bruce Marling. She and Bruce were invited for dinner at a mutual friend’s home in the spring of 1988, and Pauline remembers that she chose to drive herself, just in case “the bachelor turned out to be a dud”. However, they were both impressed with the matchmaking and Bruce called the next day to invite her out to dinner up the shore – but warned her she would have to climb into his truck. That date started the first of many climbs into the truck to go for dinner up the shore or into Yarmouth. Pauline and Bruce were married on October 1, 1988, and she quickly inherited a step-son and daughter-in-law, as well as four grandchildren. She moved to Raynardton, NS, and was quickly accepted and loved by the family and the community.
Pauline loved trying different crafts and filled her home with various projects she had made; she taught her new granddaughters how to do needlepoint canvas and would set aside small projects for them to practice on. She also loved to bake. She would always bring a loaf of home-made brown bread to family gatherings and apologize that it might not be the best, but it always disappeared quickly. At Christmas, she would make Scotch Cookies, another favorite. Early on, she hosted her new family for a gathering on Christmas Eve, where a bottle of Cream Soda Crush was somehow shaken up and exploded in a pink mess all over the kitchen. Everyone laughed for years about this, including Pauline, but she decided after that that it might just be easier to move family meals to restaurants. However, if anyone happened to show up after 7pm, they were guaranteed to get a little “lunch”. She was a whiz at playing cards and amazed her grandchildren with her speed at counting while playing various games. She was a regular volunteer for several years in the Gift Shop at the Yarmouth Regional Hospital and always had a smile for everyone she came in contact with. Pauline had a great sense of humor and laughed often.
Pauline was extremely generous with her friends and family. Her grandchildren soon moved away for school and work, but on every visit home she would pull them aside and slip them $20, advising them to “have a little fun”. She would also hand-write letters to them regularly, filling them in on the community news.
Pauline enjoyed music and played the piano beautifully. She was often caught humming while she worked around the house. At her recent 100th birthday party she was happy to sing to her guests, favoring them with a verse from “Amazing Grace” as well as “She’ll be Coming Round the Mountain”.
Pauline is remembered as being witty and kind, and always very gracious. She always tried to see the good in others and to speak kindly of them.
A grave side service will be held for Pauline – date and time to be determined. Pauline will be buried next to Bruce in the Brooklyn Cemetery.
The family asks that, in lieu of flowers, you bake a treat or write a letter to someone that you love, just to brighten their day – that is what Pauline would wish.
Read Less

To send flowers to the family or plant a tree in memory of Pauline Marling, please visit our Heartfelt Sympathies Store.

Receive notifications about information and event scheduling for Pauline

We encourage you to share your most beloved memories of Pauline here, so that the family and other loved ones can always see it. You can upload cherished photographs, or share your favorite stories, and can even comment on those shared by others.

Guaranteed hand delivery by a local florist
AM

Posted Mar 09, 2021 at 11:32am
To the family of Pauline, my sincere sympathy in the lose of your Mom. I met Pauline when my Mom was at
Treasured Memories. Pauline and my Mom, always ate their meal side by side, and became friends. She was indeed had a great sense of humor, one never knew if she was serious or not, until that little smile appeared on her face. Pauline was a very lovely lady, Alice Murphy

Posted Mar 07, 2021 at 04:01pm
My mother, Joyce C. Rogers, and I wish to express our sincere sympathy to Dave, Angela and family on your loss.
Pauline was a lovely lady. Veralyn Rogers Bonnar
Comment Share
Share via:
CR

Posted Mar 07, 2021 at 09:14am
To Pauline's family, please except our heartfelt sympathies on her passing.
Pauline and Bruce were our neighbours for many years in Raynardton
They were the very best of neighbours and friends.
Carl and Geraldine Raynard
Comment Share
Share via:
KB

Kent & I are so sorry for your loss. She was an amazing woman. Take care all of you with love from the Burtons 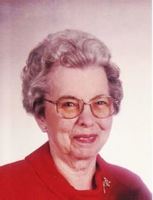