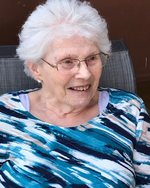 Leona Brown, age 86 of Yarmouth, NS, surrounded by family, passed away peacefully on Saturday, April 30th, 2022 at the Villa Saint-Joseph du Lac Long Term Care facility in Dayton. With her family by her side, she passed due to complications of COVID-19.

Leona was born on August 6, 1935, in Newton, Massachusetts, to Frank and Irene Crockett. She moved to Upper Stewiacke, NS when she was eight years old.

She married Fraser Murray on November 27, 1958, and they went on to have five children: Brian, Kathy, Rob, Steve, and Rachel. After her divorce, she married Hugh Brown on August 26, 1995, and became stepmother to his son Chris. She spent the rest of her life devoted to Hugh and their newly combined family.

Leona worked at the Yarmouth Memorial Hospital beginning as the only lab technologist and as the lab grew, became the chief laboratory technologist. As Chief lab tech. she served as the lab manager, overseeing the lab, EKG department, and the School of Laboratory Technology. She decided to retire at the age of 59 on Sept 31, 1994, after a 37-year career as a health professional.

Leona was always very involved in her community and post-retirement would see her life become even busier. She served on the Provincial Health Advisory Council for several years and was also asked to voluntarily serve as the hospital volunteer coordinator, overseeing the Hospital Volunteers, when government funding was cut for the position. When funding was again restored, she stepped down as coordinator and began serving as one of the volunteers.

Over the years, she served as a member of The Woman’s Institute and was a leader in Brownies and Girl Guides, eventually becoming the Regional Commissioner of Girl Guides and Brownies. She was an active member of the Kinettes, a Sunday School teacher, a member of the United Church Women group and a part of too many other community-based organizations to list.

Leona was a kind, loving and generous person and she was loved by all who knew her. She was a true mother hen to her family, work-family, and friends. She could always find the good in everyone and everything. She was one of the most positive people you could ever meet.

Leona was interested in many activities including gardening, tole painting, the Red Hatters Society, arts and crafts, and square dancing, to name just a few. She loved animals, especially puppies, hummingbirds and cardinals.

The family would like to thank the staff of the Villa Saint-Joseph du Lac Long Term Care facility, especially the nursing staff, Dr. Horton, and Dr. Julie Chandler, for their exceptional care and compassion. They would also like to specifically thank Ray, who went above and beyond for Leona.

Leona lived her life loving fully and unconditionally, always going above and beyond in supporting her family, friends, and community. She enjoyed her life to the fullest and treasured the time she had been given on Earth. She was steadfast in her Faith and left this world peacefully, ready to be received by her Lord. She will be forever loved and missed by her family and friends.

Friends and family are invited to attend a Memorial Service to celebrate Leona's life. The service will be held Friday, May 6th at 2 PM at Beacon United Church (masks are required). The service will also be live-streamed at via Sweeny's Funeral Home Website. A reception will follow at Jacob’s Loft Even Center, above Sweeny's Funeral Home. Donations can be made in the name of Leona Brown to the Yarmouth Hospital Foundation or Beacon United Church. Online condolences may be sent to: sweenys@sweenysfuneralhome.net, or you may sign the guestbook online at: www.sweenysfuneralhome.net.