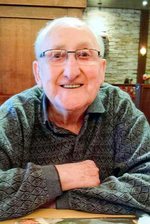 French, Kelvin Vernon, age 81 of Hebron passed away January 27,2020 at his home in Hebron. Born in Halifax, September 4,1938 he was a son to the late Douglas and Hilda (Purcell) French. In his younger years Kelvin enjoyed hunting, fishing, playing cards, crib and 45’s being his favorite, stamp and coin collecting. During his working career Kelvin was a shipping clerk for Sears in Halifax. He also owned and operated Eaton’s Cottages and Motel, in Hebron. He loved to watch Oak Island and Walking Dead, never missing an episode. He also enjoyed spending time with his granddaughters. He is survived by his daughters, Belinda (Carl) Killam, Pembroke; Nancy (Jason) Garber, Bedford; son, Christopher (Martha Doucette), Port Maitland.; granddaughters, Grace Garber and Emily French. Aside from his parents he was predeceased by his loving wife Brenda (Harnish) and brother Douglas. Funeral arrangements have been entrusted to Sweeny’s Funeral Home, Yarmouth. A Memorial service will be held on Saturday, February 8, 2020 at 1:30 p.m. at St. James Anglican Church in Herring Cove. Private burial service to be held at a later date. Memorial donations may be made to the St. James Anglican Church in Herring Cove. Online condolences may be sent to: sweenysfh@eastlink.ca or you may sign the guestbook on-line at: www.sweenysfuneralhome.net.