To share your memory on the wall of Josephine Cotreau, sign in using one of the following options:

Today we announce the loss of our dear mother, grandmother, great-grandmother, aunt and a friend to many, Josephine Jacqueline Murphy-Cotreau. Mom is the last of the 14 children of Captain Will Murphy a... Read More
August 26, 1926 - September 6,2020

Today we announce the loss of our dear mother, grandmother, great-grandmother, aunt and a friend to many, Josephine Jacqueline Murphy-Cotreau. Mom is the last of the 14 children of Captain Will Murphy and his wife Frances (LeBlanc) of Wedgeport. She lost her father at the age of seven, but with so many older brothers, she never lacked for paternal affection and support, especially from her brother Walter Murphy. She loved her family and neighbourhood in Wedgeport, where her many cousins filled her childhood with happy memories. She married our father, Edwin Surette, also of Wedgeport and settled for a number of years in Halifax, where her three children were born and where she met her best friend for life, Vina Pothier. A longing for Wedgeport brought them home where they purchased a bungalow and lived for many years. After Dad passed, she eventually remarried Lawrence “Del" Cotreau and moved to Revere, Mass, keeping her home in Wedgeport for holiday visits.

After 12 years, the couple moved to Wedgeport and resided there until illness dictated that they could no longer live at home. After the passing of Del, Mom moved to The Meadows, where she spent the last three years of her life. She was cared for by so many wonderful people there under the medical direction of Drs Horton and Chandler. Mom loved her family above all else and the isolation of the past months due to COVID 19 was her last cross to bear.

We ask that there be family flowers only and donations be made to the Wedgeport Cemetery and the Meadows Home for Special Care.
Visitation will be Friday, September 18th, 7-9pm from the Sweeny’s Funeral Home Chapel. Funeral Service will take place 11am Saturday, September 19th from the Saint Michaels Catholic Church in Wedgeport. Father Albeni d’Entremont officiating. Interment to follow in the Parish Cemetery. Online condolences may be sent to sweenysfh@eastlink.ca, or you may sign the guestbook online at www.sweenysfuneralhome.net.

Mom, we could never say goodbye to you. We will just say, “We love you. See you later .”
Read Less

To send flowers to the family or plant a tree in memory of Josephine Jacqueline Cotreau, please visit our Heartfelt Sympathies Store.

Receive notifications about information and event scheduling for Josephine

We encourage you to share your most beloved memories of Josephine here, so that the family and other loved ones can always see it. You can upload cherished photographs, or share your favorite stories, and can even comment on those shared by others.

Posted Sep 25, 2020 at 06:23pm
Sorry to have just heard of Josephine's passing.
Condolences to Eldon and all the family. Much Love !
Comment Share
Share via:
GL

Posted Sep 11, 2020 at 07:31am
Deepest sympathies to Donna & Family and Eldon $ family . Aunt Josephine gave us many great treasures with all the memories she had of family from the past we never got to know . Loved those stories . She will be in out hearts forever.
Comment Share
Share via:
BM

Posted Sep 10, 2020 at 05:01pm
Eldon,Donna & Family
Will miss Aunt Josephine. She was always happy to see us.
When she lived at home her and Del always wanted to get us a drink. My deepest condolences
Love Barbara
Comment Share
Share via:
J

Donna, Eldon and the family my deepest condolences to everyone. Josie as she was known to our family was a huge part of my entire life. She visited our home in Halifax often and was considered part of our family. We spent many nights sitting around the supper table enjoying rappie pie or other delicious meals, having great conversations with tons of laughter. She will always have a special place in my heart. XO Love Denise Pothier Russell. 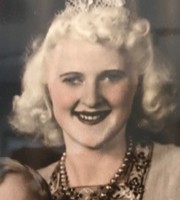