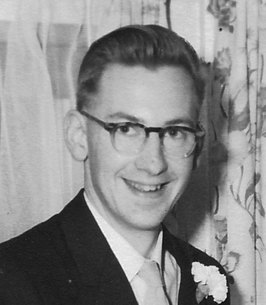 John Clark (Jack) Higby, June 29, 1932-July 20, 2022. Born in Yarmouth, Jack grew up there during the days of World War 2. After graduating from High School, he earned a certificate in electrical wiring from the Yarmouth Vocational School. He went to work briefly in the Cotton Mill before going to New Brunswick to work in the spruce budworm control program as a radio operator in the early 1950s. He then began to follow in the footsteps of his father, studying horology (watchmaking) and he went to work as a watchmaker at Hood’s Jewellery in 1954. In 1957 he began to work independently as a watchmaker serving much of the Maritimes and continued in that capacity until he joined the staff at Dykes Jewellery in 1974, near the time when his father was retiring from that position. In 1988 he left Dykes to work with his nephew, Stephen Sollows at Repair All, retiring after 2003.

Jack was meticulous in his work. He constructed his own radios from surplus components left behind after World War 2 and he became a very knowledgeable radio operator. He was an early member of the Yarmouth Ham Radio Club, making friends over the airwaves from many corners of the globe.

Jack was pre-deceased by his parents, John (Clark) and Mildred (Syvertsen) Higby, sister Vera Sollows, and daughter Ann. He is survived by his wife of 62 years, Rosalie Higby, nephews John, David and Stephen Sollows, niece Celia Sollows and special friend, Shelley MacEwen, who was like another daughter to him.

Donations in Jack’s memory can be made to the Villa St Joseph du Lac Foundation or the Regional Emergency Measures Organization (REMO) Yarmouth.

A private family committal service will follow at a later date.

The family would like to thank the staff of the Villa St Joseph du Lac for the exceptional care and compassion they showed to Jack during his years there.

VE1ZN has signed off for the final time.