To share your memory on the wall of Jeffrey Hatfield, sign in using one of the following options:

Provide comfort for the family of Jeffrey Hatfield with a meaningful gesture of sympathy.

Donations are being accepted for: HEART AND STROKE FOUNDATION OF NOVA SCOTIA.

We encourage you to share your most beloved memories of Jeffrey here, so that the family and other loved ones can always see it. You can upload cherished photographs, or share your favorite stories, and can even comment on those shared by others.

Karen and Allan Spragg sent flowers to the family of Jeffrey Lorne Hatfield.
Show you care by sending flowers

Posted Jun 06, 2019 at 11:49am
I am very sad to learn of Jeff's passing, a life long friend and childhood "through the woods" neighbor. My love and prayers go to the family and especially Suzanne and Bonnie.
Janice MacDonald
Comment Share
Share via:

Posted Jun 04, 2019 at 03:08pm
Jeff lived in Middleton and my son Robert went to school with him. Sorry to read that you lost him at such an early age.
Comment Share
Share via:

Jeff was kind and thoughtful, and freely gave his time and love to them.
The boys loved him dearly, and loved spending time with him.
They tell me stories of experiences with him always with love and laughter.
Thank you Jeff for being in their lives, and making such a difference.
I got to know him over the years, and appreciated his kind outlook, and his generosity of spirit.

Not, how did he die, but how did he live?
Not, what did he gain, but what did he give?
These are the units to measure the worth
Of a man as a man, regardless of his birth.
Nor what was his church, nor what was his creed?
But had he befriended those really in need?
Was he ever ready, with words of good cheer,
To bring back a smile, to banish a tear?
Not what did the sketch in the newspaper say,
But how many were sorry when he passed away?
Anonymous
Comment Share
Share via:
PS

Posted May 31, 2019 at 11:13pm
Suzanne,
So sorry to hear of your loss, the loss of a loved one is very difficult but more so when the loved is so young. Know that Jeff is now in God's hands and now one of his angels watching over all of you. You are in our prayers.
Pete and Janet Stanford
Comment Share
Share via:
L

Posted May 31, 2019 at 03:02pm
So very sorry for your loss. Jeff was a great man and well loved by his family and friends. He will certainly be missed especially by Josh.
Comment Share
Share via: 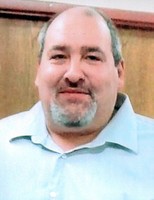