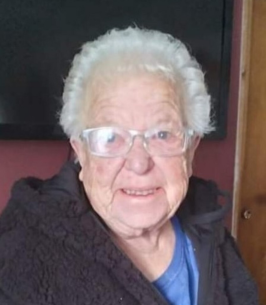 Helen Faylene Thibodeau of Brooklyn passed away, October 27,2022 in the Yarmouth Regional Hospital surrounded by her loving family. Born April 19, 1940, in Forest Glen, she was a daughter to the late Harry and Iola (Harding) Bethune. Helen worked at Zellers for many years and also in a fish plant, but her main job was being a housewife and mother. She took great pride in raising her children and caring of her family. Helen had a greenthumb and loved to garden. She also enjoyed puzzles, baking and knitting in her spare time. She is survived by her children, Holly (Raymond) Crosby, Brooklyn; Shelley (Mike) LeBlanc, Brooklyn; April (Randy) Doucette, Yarmouth; Duane (Christy) Thibodeau, Brooklyn; brothers, Orman Bethune; Burton (Betty) Bethune; sister, Linda (Michael) Hilton; 13 grandchildren and 25 great grandchildren. She was predeceased by husband, Edward; son, Terry; sister, Marion d’Eon. As per Helens wishes cremation has taken place under the care and direction of Sweeny’s Funeral Home and Crematorium, Yarmouth. A Graveside service will be held at a later date. Memorial donations may be made to the Heart and Stroke Foundation of Nova Scotia.