To share your memory on the wall of George Cunningham, sign in using one of the following options:

Cunningham, George Munro - age 85, of Halifax passed away on August 16th at the Halifax Infirmary. Born in Yarmouth, N.S. on June 4th, 1935, he was the son of the late Herbert and Grace Cunningham. Georg... Read More
Obituary for George M Cunningham

Cunningham, George Munro - age 85, of Halifax passed away on August 16th at the Halifax Infirmary. Born in Yarmouth, N.S. on June 4th, 1935, he was the son of the late Herbert and Grace Cunningham. George always enjoyed sports, in particular baseball and coached the game at the provincial and university level. In his youth, he played on the legendary (according to him) Overton Outlaws ball team along with his brothers John, Herbert (Bub), and Albert. George was an avid fan of the New York Yankees. His recreational passion was trap shooting and hunting ducks and upland game birds. In his later years, he often accompanied family and lifelong friends on hunting or fishing trips and was not shy about providing helpful advice to his companions whenever he felt it necessary. He was also a wildlife conservationist and reminded everyone he “shoots only for the table”. George always kept, trained and loved hunting dogs; his last moments were spent with his dogs Paco, a German Wirehair and Lola, a Brittany Spaniel. A recreational pilot, George flew a “Piper Warrior” and was endorsed to fly floatplanes. He was a loyal Globe and Mail reader and passionate about politics.
George met many people across the Atlantic Region during his years working in the financial industry with the Bank of Montreal, the Canadian Commercial and Industrial Bank, and Command Group Consulting and he became lifelong friends with many. He was the youngest branch manager in Canada at the time of his appointment in the Bank of Montreal. He considered his time as Canadian representative for the Bank of Montreal at the Milan Trade Fair one of his most interesting experiences. George held the position of Vice President (Atlantic) during his time with the CCIB. Although he lived in many places during his life and eventually settled in Halifax, George always knew Cape Forchu to be his home. He cherished the time he spent visiting family and friends in Yarmouth and its surrounding areas and never lost his love for southwest Nova Scotia lobster, especially during those visits.
George Cunningham was predeceased by his parents and by his siblings John, Imogene (Ray) Baker, Herbert (Bub), and Betty (Andy) Sweeny. He was also predeceased by his former wife Pat (Chappell) Cunningham and daughter Michelle Cunningham, and by his former wife Meredith (Keiver) Vickery.
He is survived by his brother Albert (Stella) of Yarmouth N.S. He is also survived by his former wife Sibylle Cunningham of Vancouver B.C. as well as his children Michael, Cape Forchu N.S.; Wendy, Tremont N.S.; Bill (Ann Fitzgerald), Halifax N.S.; Tim (Valerie), River Bourgeois N.S.; Trish, Yarmouth N.S.; Michael George, Halifax N.S.; Dr. Natalie (Dr. Sarah MacSwain), Halifax, N.S.; Caroline, Vancouver, B.C. He is also survived by his grandchildren Emily (Jeremy), Jude (Tommy), Genevieve, Brenna, Erin and Vivienne, and seven great grandchildren.
Funeral arrangements have been entrusted to Sweeny’s Funeral Home and Crematorium, Yarmouth. A celebration of life will be held ,Saturday,September 5, at 2pm from Sweeny's Funeral Home Chapel with Rev. A.D. "Bill" Newell officiating. Interment will follow in Yarmouth Mountain Cemetery. accordance with COVID-19 quarantine restrictions. Details will be made available via the Obituary web page at: www.sweenysfuneralhome.net. Family flowers only please. Donations in memory may be made to the Charity of Choice. On-line condolences may be sent to: sweenysfh@eastlink.ca or you may sign the guestbook on-line at: www.sweenysfuneralhome.net
Read Less

To send flowers to the family or plant a tree in memory of George M. Cunningham, please visit our Heartfelt Sympathies Store.

Receive notifications about information and event scheduling for George

We encourage you to share your most beloved memories of George here, so that the family and other loved ones can always see it. You can upload cherished photographs, or share your favorite stories, and can even comment on those shared by others.

Posted Sep 25, 2020 at 08:51pm
So very sorry to hear of your family's loss. We will miss seeing Mr. Cunningham in the neighbourhood.
Our sincere condolences
Patty Monaghan, Brian Murray & Family
Comment Share
Share via:
PB

Posted Sep 05, 2020 at 08:36am
I was very saddened when I heard the news of George’s passing. Our deepest sympathies to all of his family.
George and I were introduced a long time ago in Halifax, through a mutual friend who enjoyed upland bird hunting. I have many great memories of times spent afield with George. His enthusiasm was infectious. Always telling stories about his many outdoor experiences, and of the people he had met along the way. I remember also, that he often spoke so lovingly about his children . Those were good times. Since moving so far away from Nova Scotia we hadn’t kept in touch like we used to, but on the few occasions when I returned for a visit, we still managed to get together once in awhile and catch up, and hear about our families . George always asked me how my son and daughter were keeping and was interested in hearing about what they were up to.
He will be greatly missed, but it was my pleasure to have been able to get to know him and to have so many wonderful memories of our time spent together over the years. May you Rest In Peace, George.

Posted Aug 25, 2020 at 06:48pm
To Uncle George’s children and families,
Wayne and I send our sincere sympathy to you all on Uncle George’s passing.
Our son Ryan send his condolences as well, as Uncle George always talked to him about his baseball and hockey games.
Our mother Imogene dearly loved him from the time she helped with his child care when he was a toddler until her passing in 2009. “Georgie” was always like her own son. His humour and jokes provided her with uncontrollable laughter many times, especially about Phil the farting pheasant.
Uncle George always had a smile for everyone and a twinkle in his eye. We will miss exchanging Christmas notes and pictures with him. He will be missed by all who knew him.
God bless you all as you walk this difficult road together.
Sincerely, Margie and Wayne💕🙏

My condolences on your Dad's death. He was a great friend whom I met shooting and hunting and who taught me a lot about both over the years. I will really miss his presence now as we had planned to get outdoors together again this year with his dogs and for a sail in my boat. But I will always remember him - in particular, the kindness and generosity he exhibited and the delight he took in being with people. He was, in many ways, a remarkable man.

Posted Aug 24, 2020 at 07:58pm
For George's family:
I was very shocked and sad when I heard about uncle George. He was always a good friend to me. During the years I was in Sackville, NB, George would drive down on some weekends from either Moncton or Newcastle where he was a BMO manager to take me to his home. On some of these visits, he would loan me an old single barrel shotgun and take me hunting. During one of those visits in my first year at Mount Allison I had my 17th birthday and George arranged for me to get my driver's licence using his car for the test. (In those days in NB, you just had to make an appointment with an off-duty policeman who took you driving for a few minutes and approved a licence application as long as you didn't hit anything)
George always enjoyed a feed of lobsters. When I would get lobsters for him (they always had to be females because he loved the tomally). And while I only ate claws, knuckles and tails because I didn't have the patience to pick thru the bodies or crawler legs, when George finished with a locster it looked as if a dog had picked thru the shells. For years I always cooked lobsters with the rubber bands on the claws but a couple of years ago I gave in to George and started removing the bands before cooking them. I never told him that I couldn't tell any difference in the taste.
When I was still in high school and George had started working at BMO, he sometimes brought home a pistol that the bank had for protection against robberies and we would go up on the "hotel" hill at Cape Forchu and we would practice shooting at various targets.
I still have a 10 volume set of business management books that he gave me in 1965 that were part of a course he took at BMO on his way to becoming a manager.
I will miss our regular phone calls.
He will be missed.
Don C
Comment Share
Share via: 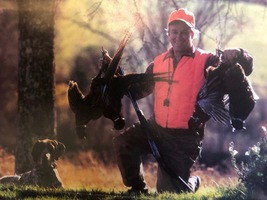 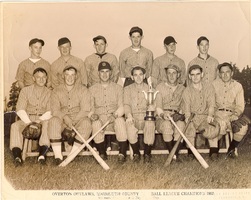 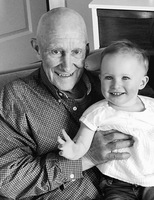