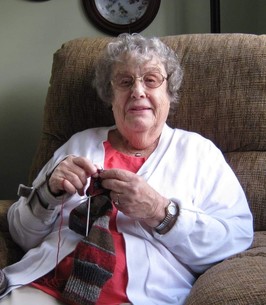 We are deeply saddened to announce the passing of our mother, grand-mother and great grand-mother, Dorothy (Dot) Evelyn MacIntosh, 97, resident of Treasured Memories Seniors Estate, formerly of Cliff Street.

Dot followed her family into Yarmoth’s musical world. As a young girl, she and her family sang on the fledgling CJLS radio station, arriving before daylight so the signal would be just right. At the age of 12, mom joined the senior choir at Holy Trinity Church. Over the next few years, she continued her many musical pursuits including arranging and playing the piano in a swing band, directing Kiwanis variety shows and performing a solo at a sold out recital at a local theatre at age 18. She was even asked to give a second performance.

Although mom had a busy musical life, she made time for her studies. Attributable to her knack for arithmetic, she was offered a job as a teller with the Royal Bank upon graduating high school.

Mom married her husband of 62 years, Frank MacIntosh in 1950. She raised her three children in their family home. Meanwhile, she directed the church’s junior choir and worked as a soloist at Central United Church. From 1959 - 1961, she taught music for the Yarmouth municipal schools and was the director of the junior and senior glee clubs at Yarmouth High School until 1969. She accepted the position as musical director of the Scotian Chorus in 1961 where they performed at Expo 67 in Montreal, one of the proudest moments of her career. They were even asked for encores.

Mom furthered her music education by attending Dalhousie University’s summer sessions for several years. In addition to classroom teaching, she made time before school and during lunch breaks to give the children guitar or ukulele lessons until her retirement in 1985. Her family and students will keep her legacy alive with fond memories of her lessons involving Prokofiev’s Peter and the Wolf, Amahl and the Night Visitors and Saint-Saëns Carnival of the Animals.

Mom and dad built a beautiful rock garden together for their 40th wedding anniversary. They spent many hours “trying” to get it perfect, even though it was. Many newlyweds and prom students took their photos with their stunning rock garden as a backdrop. Being an enthusiastic knitter, mom knitted baby sets for her grandchildren, hundreds of pairs of mittens that she donated to charities and those in need and endless warm, comfortable socks for family and friends.

Mom / Grammy was very proud of her family. She never lost her temper or raised her voice. She will be remembered as a kind and generous person. She was always appreciative and was sure to always tell her family she loved them. She will be missed and long remembered.

The family would like to send a heartfelt thank you to Shelley Reardon and the wonderful staff at Treasured Memories Seniors Estate Residence for all their kindness. A family graveside service will be held at a later date. Donations may be made to the VON. Online condolences by visiting https://www.sweenysfuneralhome.net