To share your memory on the wall of Donald Gavel, sign in using one of the following options:

Funeral arrangements have been entrusted to Sweeny's Funeral Home and Crematorium, Yarmouth. Visitation will be held Wednesday, November 25, 2020, from 7–9 p.m. with A Royal Canadian Legion Branch 155 Wedgeport service at 7:30 p.m. A funeral service will be held Thursday, November 26, 2020, at 2 p.m. from Sweeny's Funeral Home Chapel with Rev. A.D. "Bill" Newell officiating. Interment will follow in Deerfield Cemetery. In Lieu of flowers, donations can be made to Veterans Place. On-line condolences may be sent to: sweenysfh@eastlink.ca or you may sign the guestbook on-line at: www.sweenysfuneralhome.net
Read Less

To send flowers to the family or plant a tree in memory of Donald Campbell Gavel, please visit our Heartfelt Sympathies Store.

Receive notifications about information and event scheduling for Donald

We encourage you to share your most beloved memories of Donald here, so that the family and other loved ones can always see it. You can upload cherished photographs, or share your favorite stories, and can even comment on those shared by others.

Posted Dec 17, 2020 at 07:46pm
Thinking of the family at this time. You may not remember as it has been years, but I remember both your mom and Dad and going to visit there often when I was young with my parents, Reg and Lil Dalton. Good memories. I am sorry for you loss, but I believe we never really lose those we love - they live on in our hearts forever . Debbie Churchill (nee Dalton)
Comment Share
Share via:
LD

Posted Nov 26, 2020 at 10:20am
Our Condolences to the family. Good memories when our parents were your neighbors.
Lloyd and Joan Doane
Comment Share
Share via:
LD

Posted Nov 25, 2020 at 02:25pm
thinkig of all of you at this time they were so happy to see useverytime we went to visit they were both so niceits been a hard year and have not been able to visit like we wanted but rest assured that i am thinking of you all love yvonne
Comment Share
Share via:
MT

Posted Nov 25, 2020 at 01:05pm
Dear Darla, Rosemary, Gordie, and Paul: Please accept my sincere condolences on the passing of your dear Dad. My memories of him go way back to childhood, when your family first moved to Pleasant Lake. I have always thought of your Dad with such fondness - we always had good conversations, and of course he enjoyed teasing a bit! I remember how tidy he always kept his workshop, and I loved to see the beautiful things he created from wood. I remember our visits when my children were young, and we lived right across the road from each other. He was never too busy to stop for a chat, and to speak with the kids. He was a good, sweet, lovable person, and he lived a remarkable life. He will be missed.
Comment Share
Share via: 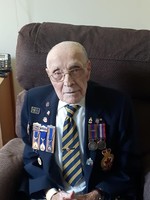